NEW YORK — A former deputy inspector for the New York Police Department was exonerated on bribery charges Wednesday after prosecutors failed to prove he accepted gifts in exchange for doing favours for two businessmen.

The verdict that cleared James Grant also resulted in the conviction of his co-defendant, businessman Jeremy Reichberg.

It capped a nearly two-month trial that featured angry fights between lawyers and the testimony of a prostitute who said she was hired by businessmen for a 2013 flight to Las Vegas with Grant and others.

The trial cast a negative light on Mayor Bill de Blasio after Reichberg and another businessman raised money for the Democrat. The mayor was never accused of wrongdoing.

Grant’s exoneration was a rare loss for prosecutors in a Manhattan courthouse where they secure convictions against most defendants.

John Meringolo, a lawyer for Grant, said he was glad that his client will get a chance to rebuild his life.

“I’m just happy for Jimmy and his family,” the lawyer said. “What they put his family through was not nice.”

Grant thanked his lawyer and his family.

“We’re disappointed with the verdict. We think there are real issues on appeal. We’ll continue to press them,” she said.

As for her client, she said: “He’s happy for his friend Jimmy Grant but disappointed.”

Necheles said she believed the jury had trouble seeing past “irrelevant garbage” that emerged during the trial.

Prosecutors claimed Grant helped Reichberg obtain a licensed gun more quickly than usual and gave him other assistance in return for gifts.

They also said Reichberg and another businessman, Jona Rechnitz, once dressed as Santa Claus to deliver gifts to high-ranking police officials on Christmas Day 2013.

Rechnitz pleaded guilty to honest services wire fraud and testified for the government at the trial. He described arranging a flight on a private jet to Las Vegas for the Super Bowl in 2013, when the prostitute, Gabriella Curtis, was aboard.

Curtis also testified, recalling what she could from the weekend.

“No one wanted to be in any pictures. That was very clear the whole weekend,” she said.

Rechnitz also testified last year at the trial of Norman Seabrook, the former head of the union representing guards at Rikers Island. Seabrook was convicted of corruption charges and awaits sentencing.

Via Children of Divorce

NEW YORK — Daryl Dragon, the cap-wearing “Captain” of “The Captain and Tennille” who teamed with then-wife Toni Tennille on such easy listening hits as “Love Will Keep Us Together” and “Muskrat Love,” died Wednesday at age 76.

Dragon died of renal failure at a hospice in Prescott, Arizona, according to spokesman Harlan Boll. Tennille was by his side.

“He was a brilliant musician with many friends who loved him greatly. I was at my most creative in my life, when I was with him,” Tennille said in a statement. Dragon and Tennille divorced in 2014 after nearly 40 years of marriage, but they remained close and Tennille had moved back to Arizona to help care for him.

Dragon and Tennille met in the early 1970s and soon began performing together, with the ever-smiling Tennille singing and the dourer Dragon on keyboards. (He would later serve as the Captain and Tennille’s producer). Their breakthrough came in 1975 when they covered the bouncy Neil Sedaka-Howard Greenfield song “Love Will Keep Us Together.”

Sedaka and Greenfield, a top hit-making team in the early 1960s, were nearing the end of their partnership and had written the song as an ode to their longtime bond. Sedaka himself recorded the song, released it as a single in France and included it on his 1974 album “Sedaka’s Back.”

The Captain and Tennille’s version, slightly faster and more elaborately produced than the original, topped the charts in the summer of 1975 and honoured Sedaka’s authorship when Tennille sang “Sedaka’s back” at the close. “Love Will Keep Us Together” won a Grammy for record of the year and not only made the Captain and Tennille stars, but helped further revive Sedaka’s career. In October 1975, his single “Bad Blood” hit No. 1.

Meanwhile, the Captain and Tennille followed with a mix of covers such as “Muskrat Love” and “Shop Around” and original songs, including Tennille’s ballad “Do That to Me One More Time,” which hit No. 1 in 1980. They also briefly starred in their own television variety show before their careers faded in the 1980s.

A Los Angeles native, Dragon was the son of Oscar-winning composer Carmen Dragon and singer Eloise Dragon and was himself a classically trained musician. Before he was with Tennille, he played keyboards for the Beach Boys and was dubbed “The Captain” by singer Mike Love, who noted Dragon’s fondness for sea captain’s caps.

In 2016, Tennille published “Toni Tennille: A Memoir,” which presented their marriage as far removed from their cheerful hits. They wed in 1974, but Tennille recalled that their marriage was announced in advance — and to their surprise — by the record company. The couple, which had been living together, made it official in November of that year.

Tennille would allege that the marriage suffered from lack of intimacy and blamed it on what she described as Dragon’s “very, very difficult family and ”famous but overbearing father.“

“”I kept trying and trying and thinking I could bring this man who has so much to give into the light,“ she told NBC’s ”Today“ show in 2016. ”I wanted him to experience the joy that I had with my very loving family.“

He is survived by his older brother, Doug Dragon, and two nieces, Kelly Arbout and Renee Henn. 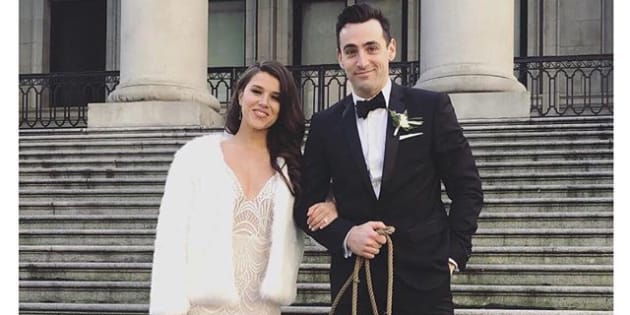 The 34-year-old singer, who faces sex assault charges in an Ontario court, wed Rebekah Asselstine in Vancouver on Monday.

The nuptials were captured through various photographs and videos posted by guests on social media.

Asselstine is a 28-year-old actress who’s played roles on TV series “Supergirl” and the Hallmark movie “Road to Christmas.”

Posts showed the couple slow dancing to Audrey Hepburn’s rendition of “Moon River” from the movie “Breakfast at Tiffany’s.”

They also sat together at a grand piano while Hoggard serenaded Asselstine with a ballad.

The celebration comes as Hoggard awaits a preliminary hearing set for July in his sex assault case. He’s facing one count of sexual interference and two counts of sexual assault causing bodily harm.

Hoggard’s lawyer did not respond to a request for comment.

Hoggard has previously denied engaging in non-consensual sexual behaviour, but has said he acted in a way that objectifies women. The allegations emerged before charges were laid, prompting Hedley to go on an indefinite hiatus.

Hoggard’s case will return to court in May to confirm the date of the preliminary hearing.