In 2002, Brian Dunkleman hosted American Idol’s first season alongside Ryan Seacrest. Now, he is an Uber driver — and he insists he’s NOT ashamed.

Hours after reports broke the news that the former comedian was driving passengers around town, he took to Twitter to explain himself while at the same time slamming haters.

“I chose to stop doing standup comedy and started driving an Uber so I could be there for my son as much as he needed after our life as we knew it was destroyed. Print that,” Dunkleman wrote this Thursday.

I chose to stop doing standup comedy and started driving an Uber so I could be there for my son as much as he needed after our life as we knew it was destroyed.
Print that.@TMZ @HarveyLevinTMZ

“And I make over a grand on a good week motherf—er. #HumanBarnacles,” the funnyman continued.

RadarOnline.com has learned Dunkleman is currently wrapped up in a nasty divorce battle with wife Kalea Dunkleman, who he has claimed was an abusive alcoholic. And while the life change has also called for a career change, the former show co-host seems to be doing just fine with his beloved son and new girlfriend, Andrea Whitney.

After reporters slammed Dunkleman over his failed career this Thursday, Whitney shared a photo of the funnyman hugging his young son atop a mountain. “This is why he’s an Uber driver. F— you,” she captioned the post.

This is why he’s an Uber driver.
Fuck you @TMZ #ImInLoveWithAnUberDriver@briandunkleman pic.twitter.com/EY02CNPLlw

According to divorce documents, the former actor started driving for Uber in March 2016, works about 45 hours a week, and makes about $800 a week. And though it’s no Hollywood, he’s never been ashamed of his humble gig.

“It’s comforting to know that I’m at a point in my career when I have absolutely nothing to lose due to an inappropriate tweet #GRATEFUL” he tweeted this May.

Kim Kardashian Can Pay For Surrogacy Under U.S. Law, But Canadian Rules Differ

By now, it’s probably common knowledge to anyone who uses the internet that Kim Kardashian and Kanye West are expecting their fourth child. A surrogate is pregnant with the couple’s baby boy, who will be born this spring, according to Us Magazine.

Kardashian carried the first two babies, but she suffered life-threatening complications. During her first pregnancy she had pre-eclampsia, a high blood-pressure condition that can be fatal for both the mother and the baby. And both pregnancies also involved placenta accreta, where part of the placenta stays attached to the uterine wall after childbirth, instead of detaching like it’s supposed to. Placenta accreta can cause severe blood loss after the child is delivered, which can sometimes be fatal for the mother.

But Kimye wanted to continue their family so they used a surrogate for their third child, according to Us. In August, Us reported that they had one embryo left, a boy, and that the couple planned to have it implanted in a surrogate “soon.” That math checks out, as the baby is reportedly due in “very early” May.

What exactly is surrogacy?

Surrogacy is a birth option for couples who can’t conceive on their own or who don’t want to carry a baby, whether for health or other reasons, where another woman carries the baby. In what’s called “traditional surrogacy,” a surrogate mother is implanted with the father or sperm donor’s semen. Since the donor uses her own egg, she’s genetically related to the baby.

In “gestational surrogacy,” which is what Kardashian and West did, the couple uses in vitro fertilization to implant an embryo that uses their own sperm and egg, or the egg from a donor. That means the surrogate isn’t genetically related to the baby. It’s a more medically complicated procedure, but is often more effective.

In the U.S., surrogacy is governed at the state rather than the federal level. California, where the Kardashian-West clan lives, is considered a “surrogacy-friendly” state because anyone can hire a surrogate — a straight couple, a gay couple, married people, single people, anyone.

The laws differ quite a bit by state — in Illinois, for instance, the baby has to be genetically related to one of the parents, and in Florida the parents have to be married. In other states, including New York and Arizona, surrogacy agreements are against the law.

Paying someone for surrogacy is illegal in several other countries including the U.K., Australia, New Zealand and Denmark. 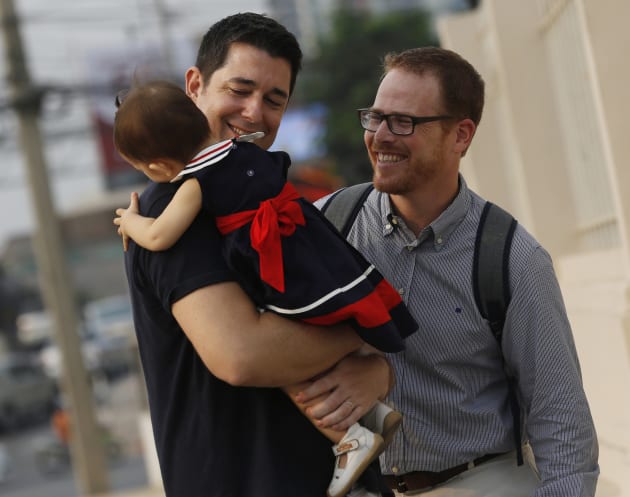 What about in Canada?

Unlike in the States, it’s illegal to pay for surrogacy anywhere in Canada. Outside of Quebec, the process is allowed as a volunteer service, but money can’t change hands, unless it’s to cover expenses such as medical care, travel, clothing and/or food.

As part of the Assisted Human Reproduction Act, which went into effect in 2004, anyone who pays another person to carry a baby on their behalf can face a $500,000 fine, or up to 10 years in prison. It’s illegal to pay for sperm and egg donations as well, but Canadians can currently buy them from American clinics.

Another difference between the bordering countries is that in Canada, the surrogate mother remains the baby’s legal parent at birth.

Quebec is the only Canadian province that doesn’t recognize surrogacy contracts at all. It doesn’t mean it can’t be done as an altruistic service, but in a situation where the surrogate mother changes her mind and wants to keep the baby, the prospective parents can’t challenge her.

The federal government has said it wants to ease up on the regulations, which some people have called too harsh. The proposed changes would allow both sperm/egg donors and surrogates to charge for more services.

Why isn’t it legal everywhere?

As with many issues where reproduction and technology intersect, there are some questions about the ethics of surrogacy. In place where commercial surrogacy is legal, contracts generally involve the surrogate signing over all paternal rights to the paying couple. At a clinic in the Ukraine last year, a surrogate wanted to have an abortion after a heart defect was discovered in the baby she was carrying for a foreign couple — but she couldn’t, because she had relinquished all her rights.

Even without paying the surrogate a fee, surrogacy is expensive. Surrogacy In Canada estimates that depending on the pregnancy, the cost is somewhere between $30,000 and $98,000. Because the process is so expensive, there are concerns about wealthy people exploiting poor women. For that reason, Thailand, Nepal and India have all banned commercial surrogacy for non-residents. (Cambodia, though, remains a haven for many foreigners seeking inexpensive surrogate.)

Even in areas where commercial surrogacy is legal, there are questions about how much it should cost. Some Kardashian critics took issue with the fact that the couple paid their surrogate only US$45,000 when they have a combined net worth over US$510 million, according to Forbes, although experts have said that is in fact the going rate. It’s also unclear where exactly the lines are drawn — for instance, some people took issue with the fact that Kardashian didn’t invite her surrogate to her baby shower.

What else should I know about surrogacy?

Between 2001 and 2014, approximately 1,100 babies were born to gestational surrogates, according to a study published in the Journal of Obstetrics and Gynaecology Canada.

“It’s a lot more common than you would think,” Breanne Willoughy-Brown of Canadian Fertility Consulting told Global News. Approximately one in six Canadian couples struggle with fertility, and although many use surrogates, not all of them talk about it.

“Because there is so much shame related to it, your neighbour could be a surrogate and you may not know.”

TEXAS CITY, Texas — Authorities in Texas have taken into custody a 27-year-old man after three young children were found dead Thursday in an apartment.

Police in Texas City, 48 miles (77 kilometres) southeast of Houston on the Gulf Coast, went to Pointe Ann Apartments on Thursday evening on a welfare check and discovered the children along with a woman with a gunshot wound to the head.

One of the children was an infant, another was two years old and the third was five years old, police said in a statement.

The woman was listed in stable condition at a Galveston hospital. Her relationship to the children was not immediately clear.

Later Thursday, Houston police received a call from a man who identified himself as the person being sought and asking to surrender. He was apprehended peacefully in Houston, said Houston police officer Ben Starr. He declined to identify the man, who was sought as a person of interest.

Texas City police Lt. Kenneth Brown told the Houston Chronicle that the wounded woman is unable to speak to investigators. He described her injuries as severe.

“It’s a very intense scene over there,” he told the newspaper. “Everybody involved is either deceased or injured.”

Investigators have not indicated a motive in the case.

Via Getting a Divorce

An intruder who awoke a couple after he crawled over their young daughter, who was sleeping on their bedroom floor, was sentenced Thursday to five months in jail.
Christopher Ruston, 33, of Chatsworth pleaded guilty in the Ontario Court of Justice to unlawfully entering the house, and to possession of methamphetamine Oct. 9.
Grey County Crown attorney Peter Leger said the couple was sleeping in bed, while their young daughter slept on the floor beside them. A young son slept in another bedroom.
The woman awoke to see a male figure crawling across the bedroom floor, alongside their bed after 2:30 a.m. After considering whether it was her son, she realized it was an intruder.
She screamed for her husband who awoke and asked Ruston who he was. Ruston identified himself as “Christopher” and said he was looking for the door. The husband pushed him out of the bedroom, towards the door and out of the house.
Justice Julia Morneau banned publication of the names of the family members to prevent the children from being identified. The youngster was shaken but unharmed.
Ruston was seen heading toward Highway 10. Police found him not far away. He lived nearby and police were familiar with him. The husband who confronted Ruston told police he believed Ruston was high.
Police arrested him for breaching probation and when frisked police found a bag of what Ruston told them was crystal meth. The Crown didn’t proceed on a breach of probation charge. Ruston told police he entered the house to steal.
Federal prosecutor Elizabeth Barefoot said Ruston has a record of related convictions. He possessed less than one gram of meth, she said. She called for 15 days in jail on top of the five months sought by Leger.
Leger told Morneau it would have been terrifying to discover Ruston in the house. He remarked in “other jurisdictions,” such a discovered may have been dealt with differently by those who found him.
Leger added Ruston was “lucky he walked out of there without a scratch.”
Ruston told his lawyer he attributed his actions to stupidity. Morneau asked him if he was a meth addict but Ruston denied it, then said he’s worked all his life. He also told his lawyer he was “a little high and drunk” at the time.
Morneau noted Ruston’s criminal record included prior convictions for being unlawfully in a dwelling and numerous break and enters. Morneau told him meth was taking over his life.
She imposed a five-month term of jail, which she counted as 150 days, less 129 days of enhanced presentence custody, which left 21 days to serve. She imposed no further time for the drug possession.
Probation for 12 months will follow his release, with victim non-association terms and counselling for substance abuse and anything else identified by his probation officer.