Netflix made awards show history by dominating the 2020 Golden Globes nominations, scoring its first-ever Best Picture nods for four of its films.

But Canadians were largely shut out of this year’s awards, with no nominations for last year’s Best Actress in a Drama series, Sandra Oh, or homegrown success story, “Schitt’s Creek.”

The only CanCon on the nominees list came from Aylmer, Que.’s Deam DeBlois, who wrote and directed Best Animated Picture nominee “How to Train Your Dragon: The Hidden World,” which features the voice of Montreal actor Jay Baruchel. And another Montrealer, Jean-Marc Vallée, is executive producer of “Big Little Lies,” nominated for Best Drama Series.

This year was light on surprises, with Noah Baumbach’s devastating portrait of divorce “Marriage Story” leading the pack with six nominations across the acting, writing and directing categories. Martin Scorsese’s gangster epic, “The Irishman,” which arrived on Netflix earlier this month after a limited theatrical release, trailed not too far behind with five nominations, though Robert De Niro was snubbed in the Best Actor race.

The nominees for achievements in film and television ahead of the 77th annual awards ceremony were unveiled by actors Tim Allen, Dakota Fanning, and Susan Kelechi Watson at a news conference at the Beverly Hilton in Los Angeles, which will host the entertainment industry’s biggest party early next year. 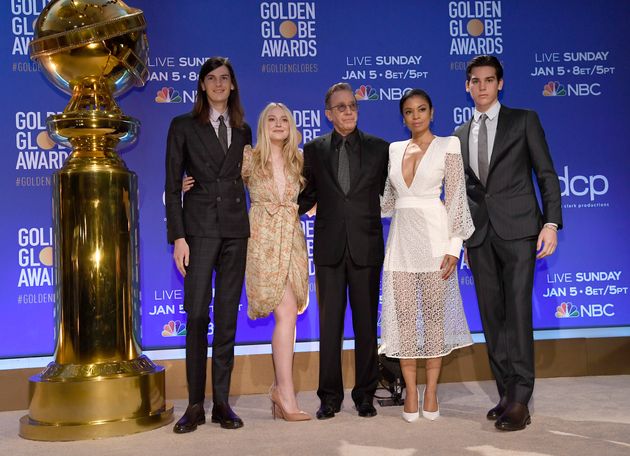 The idiosyncratic voting body comprised of 90-plus journalists, known as the Hollywood Foreign Press Association, determine who’s in the running for Globes glory and have a history of surprising Hollywood with refreshingly divergent nominations. Last year’s winners, however, were an uncharacteristically accurate portent for Oscars gold, with Rami Malek of “Bohemian Rhapsody” and the polarizing “Green Book” taking the top prizes.

This year, Netflix’s Eddie Murphy-fronted comedy “Dolemite Is My Name” was also represented strongly in nominations for the comedy categories, while the absorbing religious drama “The Two Popes” scored four nods for the streaming service.

But don’t count out Quentin Tarantino’s sweeping “Once Upon A Time In Hollywood” about Hollywood’s golden age, which nabbed five nominations, or Todd Phillips’ record-breaking “Joker,” which won four nominations and could get the last laugh this awards season. In the television arena, Netflix’s royal drama “The Crown” and “Unbelievable,” as well as HBO’s “Chernobyl” are front-runners heading into the ceremony, while Apple TV Plus’ “The Morning Show” made a surprisingly plentiful showing with nominations for leads Jennifer Aniston and Reese Witherspoon. After a divisive final season, HBO’s “Game of Thrones” won’t make a victory lap at the Golden Globes ceremony, scoring only single nod for actor Kit Harington.

Despite immense critical acclaim and securing Emmys earlier this year, Ava DuVernay’s searing Netflix series, “When They See Us,” was completely ignored by the Globes.

The 2020 Golden Globes also will honour Tom Hanks with the Cecil B. DeMille Award for “outstanding contributions to the world of entertainment.” In addition, Hanks’ turn as Mister Rogers in “A Beautiful Day in the Neighborhood” may figure in the nominations.

Ellen DeGeneres is set to receive the Carol Burnett Award, which pays tribute to a performer who has made outstanding contributions to television both on and off screen.

The 77th Annual Golden Globe Awards will be presented Sunday, Jan. 5, in Los Angeles with Ricky Gervais returning as host for the fifth time.

“Dolemite is my Name”

Quentin Tarantino, “Once Upon A Time In Hollywood”

Best Actress in a Motion Picture – Musical or Comedy

Best Actor in a Motion Picture – Musical or Comedy

Leonardo DiCaprio, “Once Upon a Time in Hollywood”

Eddie Murphy, “Dolemite Is My Name”

Tom Hanks, “A Beautiful Day in the Neighborhood”

Brad Pitt, “Once Upon A Time In Hollywood”

“Portrait of a Lady on Fire”

“How to Train Your Dragon: The Hidden World”

“Once Upon A Time In Hollywood”

Christina Applegate, “Dead to Me”

Kirsten Dunst, “On Becoming a God in Central Florida”

Paul Rudd, “Living With Yourself”

Best Actress in a Limited Series or TV Movie

Best Actor in a Limited Series or TV Movie

With files from Maija Kappler and the Associated Press

VANCOUVER — The Law Society of British Columbia has moved to require Indigenous cultural competency training for all practising lawyers in the province, in response to gaps in legal education that the Truth and Reconciliation Commission identified.

“Lawyers and the law created a justice system that discriminates against Indigenous people,” said Law Society president Nancy Merrill, noting that it was illegal for a lawyer to take a retainer from an Indigenous person until the 1960s.

Last week, the law society’s board of governors determined that lawyer competence includes knowledge of the history of Indigenous-Crown relations, the history and legacy of residential schools and specific legislation regarding Indigenous peoples in Canada.

Beginning in 2021, all practising lawyers in B.C. will be required to take a six-hour online course covering these areas, as well as legislative changes that could arise from the province’s newly enacted Declaration on the Rights of Indigenous Peoples Act.

Lawyers will have up to two years to complete the course the mandatory course, which is a first among law societies across Canada, Merrill said.

“The law society’s role is to protect the public interest in the administration of justice,” said Vancouver-based lawyer Michael McDonald, who co-chaired the law society’s truth and reconciliation advisory committee. He is also a member of Peguis First Nation in Manitoba.

“Serving the public interest means a knowledge of the facts of history, even if that history does not show our society in a good light.”

Historically, the legal system was an agent of harm for Indigenous peoples and in some ways it continues to be, McDonald said, pointing to the overrepresentation of Indigenous people in prisons and the judicial system.

Issues of concern to Indigenous peoples permeate all areas of the law, he said, from criminal and family law to corporate law to environmental law to intellectual property and trademark law.

Law students in B.C. are getting some cultural competency training already, but many lawyers have been practising for decades and some are coming to the province from other jurisdictions, said McDonald, adding that the requirements passed by the law society are the “baseline minimum.”

It’s important to support criminal justice lawyers with basic knowledge of key aspects of Indigenous experiences in Canada, such as the ’60s Scoop, during which Canadian government policies facilitated the apprehension of thousands of Indigenous children who were placed with non-Indigenous foster families, McDonald said.

“People who become more aware of that can then use that to inform the quality of their legal services,” he said.

Many real estate lawyers also lack knowledge about the Indian Act and how to strike development deals on reserves, said McDonald.

“If you’re not aware of the internal politics and the history and culture of the people that give you your instructions, how are you going to be a good lawyer in that deal?”

There is a plan to develop more specific, supplementary courses in the future, he said, which would be voluntary.

In its report released in 2015, the Truth and Reconciliation Commission called upon the Federation of Law Societies of Canada to ensure lawyers receive appropriate cultural competency training, including the history and legacy of residential schools, treaties and Indigenous rights, Indigenous law, and Indigenous-Crown relations, as well as training in conflict resolution and anti-racism.

John Borrows, the Canada Research Chair in Indigenous Law at the University of Victoria, said he hopes the law society’s cultural competency training might one day delve into Indigenous communities’ own laws and legal traditions.

“It’s opening up those spaces to see Indigenous law, to see the agency of Indigenous clients and the context that they operate from,” he said.

This story by The Canadian Press was first published Dec. 9, 2019.