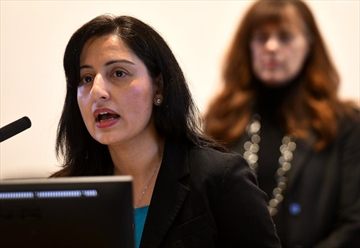 Oncologist interacted with 14 patients and 9 staff before testing positive for coronavirus while her spouse, a surgeon at St. Joseph’s Healthcare, treated an unknown number of patients before going into self-isolation.

Mother scammed out of $32,000 after getting call from someone claiming her son was in jail

An Ontario woman said she was scammed out of $32,000 after someone called her pretending to be her son’s lawyer, asking for money to help get him out of jail.

Sue, who only wanted to be identified by her first name, said she got a desperate phone call in the fall from someone claiming to be her son.

“Someone was on the phone crying hysterically and he panicking. He kept saying I love you mom and I’m so sorry, I’m in jail,” she said.

Sue said the person on the phone responded to her son’s name and said that he sounded different because he was in a car accident.

Moments later, a man claiming to be her son’s lawyer came on the phone and said her son was in a Kingston jail cell charged with impaired driving after crashing into another car and injuring a child.

Sue was told not to tell anyone what happened.

“I was told there was a publication ban so I was not allowed to talk to any friends, family, neighbours and that if I did my son’s bail could be revoked.”

Over a period of five days, the scammers asked for money in installments, which they said would be used for bail, a donation to Mothers Against Drunk Driving and to repair a traffic camera that was damaged in the accident.

Sue was the victim of what is known as the parent or grandparent scam, a fraud in which someone pretends to be a child who desperately needs monetary help. The scammers typically claim their voice is different because of accident and then a second person acts like lawyer or police officer and says funds are needed for bail and legal expenses. The victims are also told to keep it secret from other family members.

Looking back, she says she should have seen red flags, but says she could only think of trying to help her son.

Sue eventually reached out to her family and found out her son had been fine the entire time. She says she felt relief, but then she had to accept that she had given $32,000 to scammers. It was money she had set aside for home repairs and her deceased husband’s tombstone.

“To have my kids safe was worth every penny, but now I’ll have to start saving again,” Sue said.

Most of the money was sent in cash by courier to addresses in Quebec. Police have been unable to track down where the funds ened up.

If you get a call from someone claiming to be a family member in trouble, you should reach out to them directly and don’t keep it a secret from others. Don’t send money to anyone unless you know exactly where it is going and if it can be traced if there is a problem.