A couple was shocked to find a small golden chest tucked away in the attic of their new home in Burlington, but what they found inside was even more surprising.

The chest contained about 100 family pictures believed to have been from the 1940s.

“For us it was definitely a surprise to find anything at all, let alone a box that is someone’s life,” said Jessica Lucas, who moved into the home three months ago with her fiancé Cody McMullin.

The couple also found two prayer books, an envelope full of negatives and two wedding invitations inside the chest. Most of the items included names or dates.

Determined to find the descendants of the rightful owner, McMullin’s mother posted some of the pictures and the wedding invitations on the Canadian Military Spouses Facebook page. 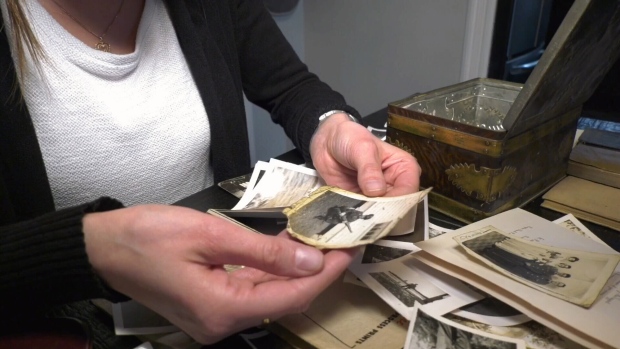 The next day they got a response from someone in Manitoba, who connected them with Cheryl Matewish in Brandon. Matewish claimed one of the wedding invitations was actually her parents, Merlin and Evelyn Koehler, but wasn’t sure if the chest and all of the artifacts inside belonged to her family.

“It seems strange, but I just don’t know if they lived in Ontario,” Matewish told CTV News Toronto.

Complicating the matter, her father died when she was young and her mother now suffers from dementia.

“I’m just curious if it was his box and pictures,” she said.

The couple is in the midst of exchanging information with Matewish, hoping to answer that question.

In the meantime, there are other names found on the wedding invitations and envelopes they intend to explore, hoping to return the chest to its rightful owner.

“It’s very important to me because this is someone’s life, and I think it’s neat to have memories and to look back on these things,” Lucas said.