Celebrating Canada Day Doesn’t Erase Its Ugly History. So, What Can We Do? 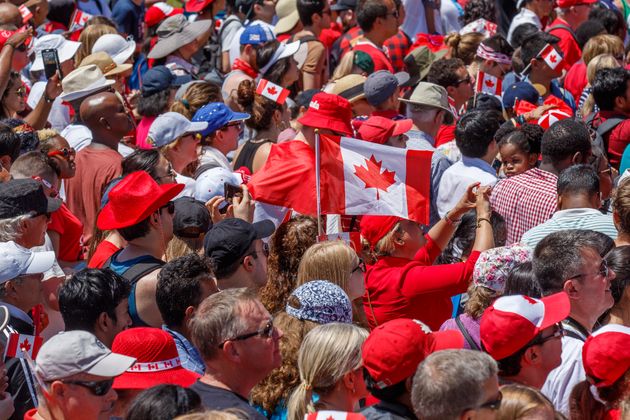 July 1 is a national holiday in a country that doesn’t always agree on all that much. Most people get the day off work. In non-pandemic years, there are Canada Day parties and BBQs and specialty beers and discounts at furniture stores. It’s a day to think about the freedoms we have in this country. It’s also a day that celebrates genocide.

Reconciling those ideas is something Canadians struggle to do at all times of the year, and have for generations. But this year, three years after the Canada 150 conversation, it feels like it’s taking an even more urgent hold. Anti-Black and anti-Indigenous violence, which happen constantly, are impossible to ignore.

When I was little, I loved celebrating Canada Day. My parents would help me put temporary maple leaf tattoos on my hands on arms, sometimes on my cheek. We got to play outside all day. In the evening, we would walk down to the park by the water to watch the fireworks. I was such a scaredy cat as a kid that I would sometimes watch wearing earmuffs to protect myself from the loud noises, an incongruous accessory on a humid July night.

Like a lot of white people, I didn’t grow up particularly aware of racism. We didn’t learn much about colonialism at school. I knew there was Mohawk territory across the lake from the Montreal suburb where I watched those fireworks, but I didn’t really know what that meant.

I never thought about what it might feel like for the people living there, to see fireworks celebrating the establishment of a country that resulted in their genocide. 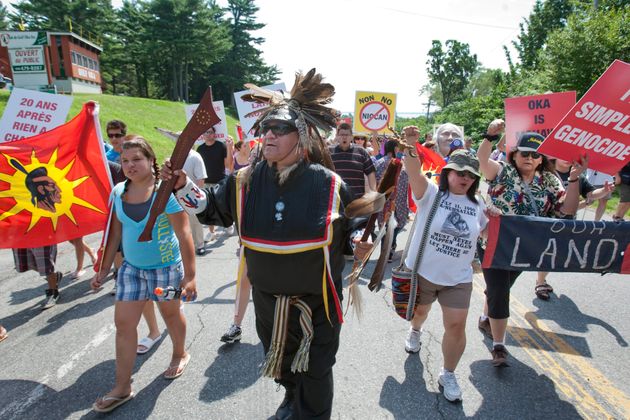 Canada doesn’t do a good job acknowledging the horrors in our history. Our education system is rarely honest about the extent of the atrocities that led to our country being formed. I didn’t learn about residential schools until outside of the classroom, in my late teens.

“Laws were enacted in Canada offering bounties for scalps of Indigenous men, women and children. The treaty negotiation process itself was conducted under conditions of starvation or threats of violence,” Mi’kmaw lawyer Pamela Palmater wrote in a piece about Canada 150 for Now Toronto.

“While some argue that these acts were committed pre-Confederation, it must be kept in mind that they are in fact how Canada became Canada.”

These aren’t issues of the past. Indigenous women continue to be harmed﻿ in what experts call a genocide. Nearly 3,000 homes on First Nations don’t even have access to clean drinking water.

As a white person, I’m lucky to live in Canada. I can make a good life for myself here, a life where I can get an education and choose what kind of career path I want to follow. I have the right to vote. I live in freedom, and I’m allowed to publicly criticize the government without fear of suppression or jail time. My grandparents, who lived in various parts of Eastern Europe, didn’t have the luxury of living that way.

Lots of immigrant communities celebrate Canada Day because of the freedom the country offers them. Not all, of course — some refugees are turned away, or treated with cruelty when they arrive. But for many people fleeing persecution and tyranny, finding a home in a country that allows them freedom is something to be celebrated.

But that doesn’t erase the ugly truth about Canada’s history. And as that relief becomes less immediate — for those of us who are the children or grandchildren or great-grandchildren of those immigrants — it gets harder and harder to justify our place here. Because we have to reconcile the fact that we’re able to live a good life here — a better life than we might be able to live in our parents’ or grandparents’ homeland — with the fact that that promise came out of an existing culture’s suffering.

Canada “simply would not be the wealthy country it is, one of the best countries in the world to live and raise a family, were it not for the removal of Indigenous peoples from the source of Canada’s wealth,” Palmater wrote.

Many Canadians live in the space between being grateful for our freedom and aware of the cost it took, and continues to take. That queasy, uncomfortable in-between is what Canada is for us.

To live with that understanding in any meaningful way means consistently unlearning a lot of what we grew up assuming to be true. It means checking in on our own motivations, to ask if they’re purely selfish.

“Being an ally goes beyond checking actions off a list and it is not a competition,” according to the Indigenous Ally Toolkit, a great resource published by the Montreal Indigenous Community Network. “Being an ally is about a way of being and doing. This means self-reflection, ‘checking in’ with one’s motivations and debriefing with community members is a continual process; it is a way of life.”

For those of us living in that uneasy expanse, the least we can do is try to educate ourselves. Here’s a very short and not even close to exhaustive list of some of the work worth watching, reading, or donating to this Canada Day.

“Angry Inuk”: Director Alethea Arnaquq-Baril joins a new tech-savvy generation of Inuit as they campaign to challenge long-established perceptions of seal hunting. Rent it from the National Film Board.

Canada’s State of Emergency: Layer and activist Pamela Palmater’s TED Talk is a short intro to some of Canada’s unjust treatment of Indigenous peoples. Watch it on YouTube.

nîpawistamâsowin: We Will Stand Up: Centred around the death of Colten Boushie, a young Cree man who was shot and killed by a Saskatchewan farmer in YEAR, the documentary looks at the colonial history of the prairies and the racism embedded within Canada’s legal system. Watch a 44-minute version for free on CBC Gem, or watch the 98-minute version with a National Film Board subscription.

“Rocks at Whiskey Trench:” A comprehensive look at the fallout from the 1990 Oka Crisis, when Mohawk people fled their land that was occupied by the Canadian army, only to be pelted with rocks by non-Indigenous protesters. Watch for free from the National Film Board.

Urban.Indigenous.Proud: A series of very short films that provide a window into some of the facets of urban Indigenous life throughout the province. Watch them for free from the National Film Board.

You can also browse the National Film Board’s archives for many more titles.

21 Things You May Not Know About the Indian Act: Helping Canadians Make Reconciliation with Indigenous Peoples a Realityby Bob Joseph

“A history of residential schools in Canada,” CBC News

A Mind Spread Out On The Ground by Alicia Elliott

Whose Land Is It Anyway? A Manual For Decolonizationby Peter McFarlane and Nicole Schabus

“All My Relations﻿,” a podcast about what it means to be Indigenous today.

“Métis in Space,” a podcast that takes an anti-colonial approach to science fiction.

“Missing and Murdered,” an investigative podcast about the deaths and disappearances of Indigenous women.

“The Secret Life of Canada,” a podcast about largely unknown parts of Canada’s history, including many episodes about Indigenous issues.

“Thunder Bay,” a Canadaland podcast about the deaths of nine Indigenous teenagers in the city with the highest hate crime rate in the country.

Indspire invests in education and wellbeing for Indigenous people across the country.

The Legacy of Hope Foundation raises awareness about the intergenerational impacts of oppression.

Native Women’s Association of Canadasupports the political voices of Indigenous women, through a variety of issues such as employment, labour and business, health, violence prevention and safety, justice and human rights, environment, early learning childcare and international affairs.

Native Women in the Artsraises money for Indigenous women in artistic careers who want to advance Indigenous people through their work.

Via Divorce House in One Name Only