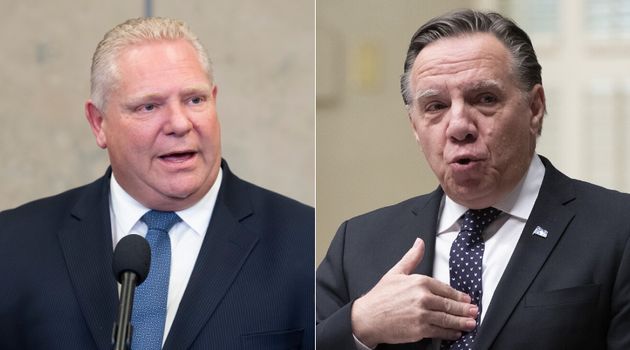 TORONTO — Ontario Premier Doug Ford says he will not raise Bill 21 when he meets with Quebec Premier François Legault on Friday, even though his government passed a motion condemning the law just days ago.

“There’s no place for Bill 21 here in Ontario — never will be under my watch,” Ford said at Queen’s Park in response to a question from HuffPost Canada on Thursday.

“We’re going to talk about things we agree on. I totally disagree with it. He knows it.”

Bill 21, which became law in Quebec in June, bans teachers, police officers and all other public servants from wearing religious symbols at work. Those include hijabs, turbans and kippahs. The law also forbids anyone giving or receiving a government service to cover their face, effectively barring Muslim women who wear niqabs.

On Monday, Ontario’s legislature unanimously passed a motion from NDP Leader Andrea Horwath that called on Ford to formally ask Quebec to withdraw its legislation.

As the Ontario Legislature debates an @OntarioNDP motion calling for repeal of Quebec’s Bill 21 (banning public servants from wearing religious symbols), @OntarioPCParty MPPs @Roman_Baber & @PrabSarkaria speak out, while wearing (respectively) a kippa and a turban. #onpoli#polqcpic.twitter.com/wjDWRJy9P7

“I believe that we in Ontario have to continue to stand up and speak out as Canadians against any form of discrimination, prejudice, racism and intolerance. Silence is never an option,” Horwath said in the house on Monday.

She told PC MPPs who voted for her motion to “talk to your premier” and make sure he takes the “historic opportunity” to stand up for the fundamental rights of people in Quebec when he meets with Legault.

“I don’t believe this is just about not allowing a bill like Bill 21 to ever come into this chamber for debate or discussion; I think it goes further than that,” she said.

Bill 21 has been a point of contention between Legault and Canada’s other premiers. The Manitoba government launched newspaper and online ads on Thursday encouraging people in Quebec who feel threatened by the law to move to the Prairies.

“Here in Manitoba, we have respect for diversity,” Premier Brian Pallister told The Canadian Press.

Ford stressed Thursday that he wanted to focus on points of agreement when all the premiers meet next week.

“We’re going to make sure that we send a clear message to the entire world and give them certainty that you can invest in Canada. We have a united country,” he said.

“With any big family, as we are, there’s going to be a few disagreements … We’ll get over these bumps.”

He said there will be common ground on issues like health care and economic development.

Ford and Legault are set to meet in Montreal on Friday evening before the all-premiers summit in Mississauga, Ont., on Monday.

With files from The Canadian Press