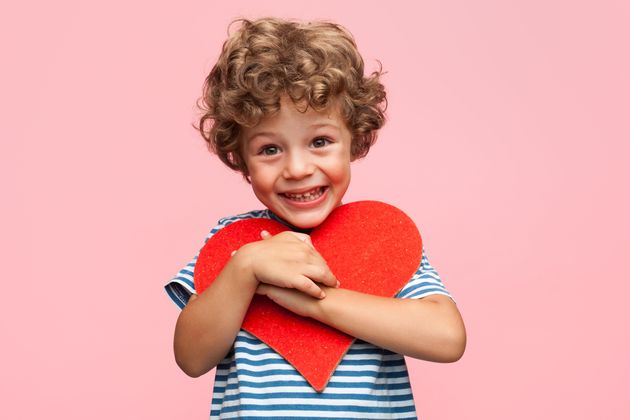 For a day that’s supposed to be about love, Valentine’s Day brings a special level of stress to parents: where’s the nearest store to buy my kid’s cards? Why did I leave this to the night before? How many students are in the class? Why do cards come in packs of 24 when I actually need 27?!

But for some families, the stress is deeper than a dilemma over whether to buy “Paw Patrol” or Care Bears cards. While we associate Valentine’s Day with chocolate and cinnamon hearts, the day is also laden with gender assumptions, heteronormativity, and a bias towards romantic, sexual relationships.

WATCH: How to talk to kids about romance. Story continues below.

As the parent of a non-binary child, Yūki Hayashifinds Valentine’s Day troubling.

When eight-year old Alex, whose name has been changed along with that of their mother, was in preschool, Hayashi recalls going to buy Valentine’s cards and being dismayed by the stereotypical gendering, “as if males couldn’t express affection without aggression, trucks, or dinosaurs.”

Alex chose a box of pink cards, and was asked by the check-out clerk if they were sure they wanted “girls’ cards.” Undeterred, Alex took the cards home and wrote “I love you” on each of them.

Hayashi, who lives in Calgary, told HuffPost Canada that “apparently this made some of the other kids (read: parents of capital-B Boys) uncomfortable.”

Parents like Hayashi work hard to create an affirming home life for their kids; research shows that family acceptance is crucial to the mental health of LGBTQ2 youth.

For transgender, non-binary, and gender non-conforming youth, this means continuously buffering societal messages about gender identity and expression, while supporting their kids to be whoever they want to be.

So it’s tough when pop culture and classroom dynamics work against an inclusive family culture — particularly on a day that should feel warm and fuzzy.

“I wish we didn’t have to keep talking with Alex about what other kids/parents say and do,” said Hayashi, adding that sometimes Alex leaves school before the cards are handed out. “They’ve been able to learn to be confident and to stand up for themselves with a smile, though. So that’s the one good thing about Valentine’s!”

It’s not just LGBTQ2 and gender non-conforming kids who struggle under the weight of mainstream Valentine’s messaging, however. Queer parents like Heather Hanwell, from the Greater Toronto Area, would also like to see a radical shift in how relationships are represented.

But the problems with Valentine’s Day go beyond heteronormativity.

Hanwell lives with her spouse, but she’s also in a long-distance queer platonic relationship; they’re not BFFs, but would like to have a ceremony to honour their bond.

Valentine’s Day doesn’t honour the beauty and complexity of love, Hanwell says, especially when it comes to family constellations like hers. “There’s a lot more fluidity in most marriages in a lot of domains that people aren’t even talking about,” she said.

The term “amatonormativity” was coined by Rice University philosophy professor Elizabeth Brake in response to the overwhelming privilege afforded to some types of relationships at the expense of others.

Robin Stevenson, an author of more than 25 books, prioritizes inclusion and representation of sexual and gender minorities in her work.

As a queer parent of a teenager, and an advocate for LGBTQ2 rights, she sees a real place for LGBTQ2 voices to move these conversations forward. Valentine’s Day is just a convenient time to talk about them.

“Especially around the piece around how we value non-romantic and non-sexual relationships, friendships, and chosen family … when it comes to those questions, the queer community does challenge assumptions and moves that conversation forward in ways that are really important for everybody.”

Valentine’s Day is complicated, but families are finding ways to salvage it.

Hayashi says in her experience growing up outside Canada, Asian schools would not allow cards to be given in class. In England, she fondly recalls a “St Valentine’s Feast” that the church would host for the community.

While some parents might question how “age appropriate” these conversations are, Hanwell says, “I wholeheartedly believe that kids are more than capable of understanding things about human relationships and power and much more and much earlier than a lot of adults give them credit for.”

Hanwell wants her daughter to grow up honouring and appreciating not only her own family structure, but also to see the possibilities and value in her relationships.

Hanwell was excited that her daughter chose cards that express the more expansive view of love that exists in her family — nothing romantic, just pictures of happy animals. “There’s so much more intentionality that I want to have around Valentine’s, and not just from a queer perspective,” she said.

@repost How Long Do You Have to Pay Alimony

Via File for Child Support