What’s The Difference Between A Sovereignist and Separatist Anyway? 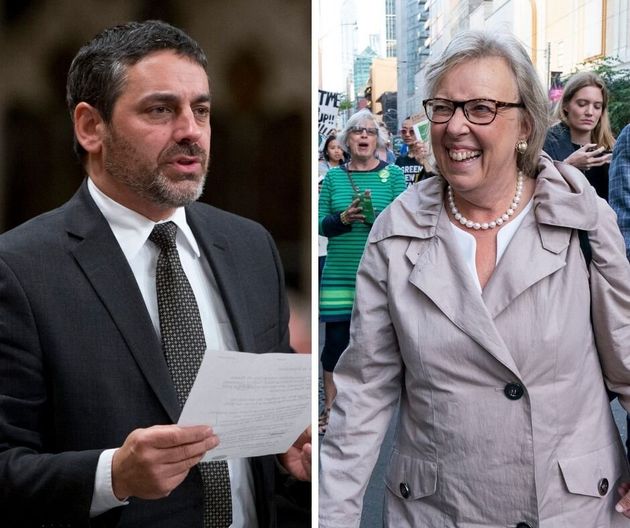 A star Green candidate’s comments about his unabashed support for Quebec sovereignty, and Green Party Leader Elizabeth May’s response, has Canadians puzzling over the difference between Quebec separatism and sovereignty.

Pierre Nantel, arguably the party’s best-known candidate in Quebec, told Radio-Canada Thursday he was indeed an avowed Quebec sovereignist (also spelled sovereigntist), one day after May said he wasn’t.

“Of course I’m a sovereigntist, everyone knows, and that’s always been the case,″ Nantel told Radio-Canada.

On Wednesday during her party’s federal campaign launch in Victoria, May said she wouldn’t endorse a candidate advocating for the breakup of the country. And on Friday, May told the Canadian Press that Nantel has never done anything to suggest he’s a separatist during his time as an MP, adding she makes a distinction between a sovereignist and someone actively fighting for Quebec’s separation from Canada.

“I make a distinction, and some others do as well,″ May said. “He never expressed an intention, or in any public way suggested, he wanted to see the breakup of Canada, period. Full stop.”

WATCH: May vows Greens will stand firm on climate emergency. Story continues below.

Nantel served nearly two full terms for the New Democrats before being expelled from caucus after it became known he was courting at least one other party. He joined the Greens a few days later to seek re-election in the riding of Longueuil-Saint-Hubert, south of Montreal.

In the Radio-Canada interview, he said the Greens were very open to having sovereignists in their ranks.

“Obviously, Ms. May is very enthusiastic about receiving sovereigntists,” Nantel said. “However, she does not want us to praise sovereignty in the House of Commons. I understand this and I agree with it, and I’ve never done it.”

He is not a separatist. He’s a strong Quebecer within the context of Canada.Green Party Leader Elizabeth May

In an interview with CBC’s “Power and Politics” Friday, May said she welcomes any sovereigntist who is prepared to put aside separatist views to tackle the more pressing issue of climate change. May also clarified that Nantel is a sovereignist, not a separatist, and that’s he’s agreed not to fight for Quebec independence if elected.

“He is not a separatist. He’s a strong Quebecer within the context of Canada,” she also said at the Green Party’s campaign launch in Victoria on Wednesday.

But what exactly is the difference between a sovereignist and a separatist — and does it matter?

Well, in English Canada there’s not a lot of difference on paper.

The two terms are fairly interchangeable, according to many style guides. The CBC uses the both terms to describe supporters of Quebec independence. The Encyclopedia Britannica article on Quebec separatism, meanwhile, uses the term “sovereigntism” throughout.

In the “Power and Politics” interview, May insisted that there was a distinction between the two terms.

WATCH: Looking back at the unity rally held before the 1995 Quebec referendum. Story continues below.

There is one reference source that separates the terms. According to the Oxford Guide to Canadian English Usage, separatist is commonly used by “those who dislike the idea of Quebec’s breaking up,” while sovereignist is “favoured by those who espouse a sovereign Quebec.”

If it all sounds like a lot of confusing semantics, that’s because it is.

But there’s more! Other words that have been associated with the movement for Quebec to separate from Canada include secession, sovereignty-association and independence. All of these have slightly different meanings.

Folks both in and out of Quebec have strong opinions on all sides. There’s no clear-cut distinction. Movements and parties in Quebec since the 1960s, most notably the Parti Quebecois and the Bloc Quebecois, have used the terms “sovereignty,” “sovereignty-association” and “independence” to describe their primary goal.

Secession refers to the act of seceding from Canada and forming a new state.

Independence is similar, and refers to becoming independent from the Canadian political system.

Sovereignty-association refers to political independence from Canada, but retaining economic association. ​First used as a slogan by forerunners of the Parti Québécois, this term became the PQ’s cornerstone. Use of the term declined in the ’80s, as simply using “sovereignty” became more popular.

Sovereignty refers to the movement to establish a sovereign state. The Quebec referendum question of 1995, didn’t mention “association,” but rather simply “sovereignty” and instead proposed an economic and political partnership with the rest of Canada.

So is a separatist a sovereignist, or a supporter of Quebec independence? Do they want secession or sovereignty or sovereignty-association? If Nantel’s circumstances are any indication, it appears that you have to ask the person in question — perhaps before inviting them into your federal party..

The more you know!

With files from the Canadian Press.